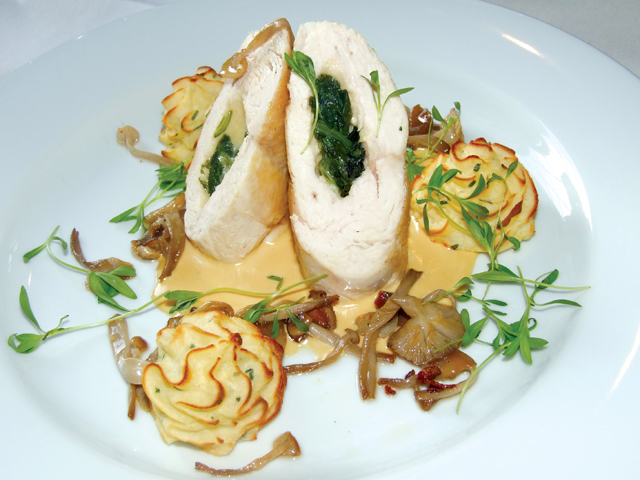 Many hotels claim to have a world class heritage but Woodhall Spa’s Petwood Hotel has a story few can match.
As the former home of the famous Dambusters 617 Squadron, The Petwood has a pedigree which sets it apart, even before a fork has been lifted or a bite taken. Its distinctive Tudor to Jacobean exterior and Edwardian oak panelling and features have been beautifully maintained and this former country residence sits amongst thirty acres of stunningly laid out gardens and woodland walks.

This month the hotel will be one of the central venues for the village’s 1940s Festival which attracts re-enactors, jitterbuggers and fans of all things from the Forties. The hotel might have its roots in previous decades but food and hospitality have to serve twenty-first-century tastes and we visited to see how the restaurant is reconciling this glorious heritage with the demands of today’s business and leisure guests.

We had a drink in the Terrace Bar. It wasn’t a warm enough evening to sit out overlooking the gardens but that is an ideal prelim to your meal on a fine night. A few people were enjoying a bar meal at their tables but we wandered through to the Drawing Room to sit down and look through the restaurant menu. There is a club feel to The Petwood with large, grandiose rooms.

The menu introduces each dish with ‘The’ which I suppose fits with people’s habit of ordering ‘The Chicken’ or The Scallops’ etc when talking to a waiter and certainly all ‘The Bases’ were covered, with six starters to choose from and nine main courses.

I began with The Potted Lamb while my fellow diner for the evening, Louise, chose The Soufflé. There was also smoked salmon, scallops, soup, and a salad on the menu. The lamb was served warm, which I had not expected, with a nice mixed leaf green salad and garlic bread slices. A mint butter poured over the shredded lamb was very flavoursome but I would have preferred bread or plain toast to offset the richness of the dish. The twice baked Poacher cheese soufflé was accompanied by a shallot and apple salad and was beautifully cooked as well as presented.

For our main courses I tucked into a perfectly pan fried piece of hake on samphire, served with a clam and cockle white wine sauce. This was a lovely dish which I ate with sautéed new potatoes and seasonal vegetables – side dishes which are £2.50 extra. Louise had ordered ‘The Chicken’; a rolled and stuffed chicken breast with spinach and Swiss cheese, with a golden enoki mushroom and tarragon sauce. Again, a beautifully presented dish which did not disappoint when eaten.

Ingredients are obviously very important to this kitchen and membership of Select Lincolnshire is evidence of their commitment to working with local suppliers and producers, some of whom are given credit on the menu.

There were familiar favourites on the dessert menu but we bypassed the white chocolate and cherry parfait, sticky toffee pudding, the chocolate fondant and strawberry cheesecake to go for The Chilled Soup and The Nuts and Beer.

The soup was chilled strawberry puree blended with double cream and yoghurt, sprinkled with fruit, a berry sorbet and whipped cream. This was a light, summery finale to my meal. Louise had been intrigued by The Nuts and Beer; a crisp peanut brûlée served with Guinness ice cream. The brûlée was slightly dense and the caramelisation of the sugar and nuts could have had more snap, but there was a layer of chocolate biscuit base to complement the nut flavour. This dish would fit in the Marmite family, as it was an acquired taste.

The service had been prompt and exceptionally friendly and staff were welcoming familiar faces they knew by name to the restaurant. We finished our meal with coffee.

The Petwood is succeeding in pulling off the trick of making the most of its unique assets while still moving forward and is unsurprisingly very popular as a wedding and event venue, as well as a gem of a country house hotel.