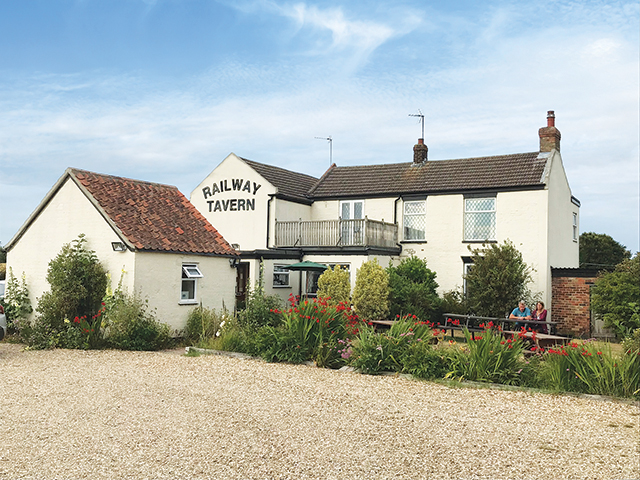 Located about an hour from Lincoln, we drove through some outstanding areas of the Lincolnshire countryside with rolling hills and big blue skies. Dawn and Keith bought the pub in 2002 after moving from Derbyshire. Talking to Dawn you can see the passion the couple have for the pub. Not long after they arrived, but after they had spent time on a refurb, the village was hit by a devastating flood. Instead of letting this get them down, and with the help of friends and family they spent months drying the walls and floor and with a new layout reopened six months later.

To celebrate their 10th anniversary the couple held a party for all their friends, family and customers who had helped them achieve their dreams. All this was recorded with Dawn’s first foray into publishing, The Story So Far, which raised over £1,000 for Lincs & Notts Air Ambulance and When You Wish Upon A Star.

We arrived a bit early for our table, but Dawn and Keith serve food all day, so they were happy for us to come in. Dawn welcomed us and offered us a drink before showing us to the menu on the chalkboard from which we would make our choices. The starters were the easy part, with only about six choices, but the main courses were much more difficult to choose among. We needed time to make sure we had made the right choices. Eventually we were both happy with our selections and took a seat in the restaurant. The restaurant and bar gave a sense of being transported back to the 1970s, but with a warm and welcoming feel.

Comfortably settled, it wasn’t long before our starters arrived. I had chosen the prawn and pineapple cocktail, an unusual twist which I was excited to try. Over the years I have been fortunate to visit many Lincolnshire eateries, and this was the first time I had seen this pairing. I’m not sure if perhaps they should keep it a secret, as the textures and flavours worked perfectly together. It’s not something I would have even considered before, but it will definitely be making its way onto my next dinner party menu. The prawns and pineapple were topped with a large helping of Marie Rose sauce, served on a bed of iceberg lettuce, cucumber and tomato. Claire, my guest for the evening, chose the battered haslet served with chutney. Not something I would have chosen, but served this way, rather than sliced from the loaf, it looked delicious.

We didn’t have long before our mains arrived and by this time the restaurant was beginning to fill up. Although there was so much to choose from, the pork steak topped with Brie and cranberry took my fancy. Again a variety of flavours I hadn’t seen before, but it worked so well. I would say this was a dinner version of the classic bacon, Brie and cranberry baguette.

All their meat is sourced locally from A Wright Butchers, Boston. Served with a choice of chips or new potatoes, salad, vegetables or peas it was a hearty meal and perfectly cooked. After some deliberation, Claire chose the 8oz rump steak. I am always nervous ordering steak in a venue I’ve not been to before, but it was cooked to perfection, and just melted in the mouth. Other options on the menu included chilli con carne, lasagne, cod and prawn bake and many more, so plenty of choice for everyone.

Although we would have left completely content at this point it seemed such a shame not to sample their desserts. This time Claire was quick off the mark and opted for the special, lemon meringue tart with vanilla ice cream, whilst I chose the gluten-free meringue nest with strawberry ice cream, fresh raspberries and cream. It was the perfect end to our meal.

The bar is stocked with a large selection of ever changing real ales from Small Beer and Batemans. They are the current Country Pub of the Year for Louth and District CAMRA.

For those coming from further afield, Dawn and Keith opened their holiday cottages last year. Great for short breaks, or longer, the location is the ideal base from which to explore our wonderful county.