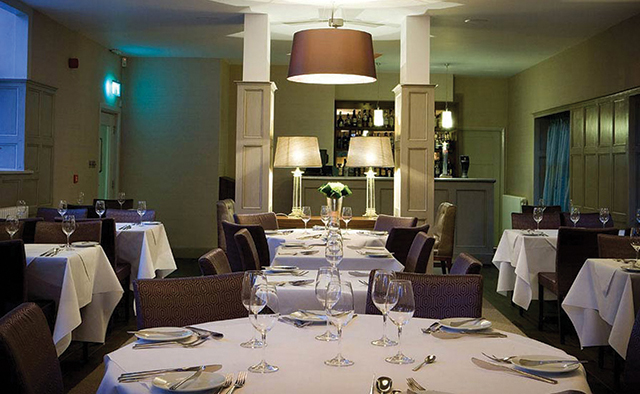 Katrina Burrill starts off 2019 with a visit to The Castle Hotel, to try the latest menu from award-winning chef Simon Hibberd.
As many of you will have read in our December issue, Simon Hibberd was the recipient of our Taste of Excellence Award 2018 for Chef of the Year. Seeing off the competition, his menu won high praise from the judges. Now with his New Year menu available, we took the opportunity to visit Simon, and try some of his recent delights.

The Castle Hotel is owned by Paul Catlow and managed by Saera Ahmed and over the years has become one of Lincoln’s top destinations. The Reform Restaurant offers a formal style of dining with an emphasis on local produce and a large of amount of creative flair from Simon and his team.

We visited on a Friday in January, so I expected the restaurant to be fairly quiet. However the hotel was abuzz with both guests and local residents. We arrived slightly early for our table and first made our way to the bar where we had a drink before being seated. It has been a few years since I last visited the restaurant and the first time under Simon’s leadership. I was lucky to sample his award-winning menu from our Chef of the Year competition, so I was looking forward to what he would be serving up that evening.

Whilst we perused the menu our waiter offered us a selection of bread which had been made fresh that day. Our choices for this visit were sundried tomato, multi-grain and spelt with a selection of butters which included sundried tomato, blue cheese and port. As it was a Friday I wanted to include fish in my choice, so I opted for the haddock risotto served with a poached egg whilst my husband chose the mushroom wontons. Both starters were absolutely delicious. The haddock in my dish flaked when touched. It was incredibly moreish and the topping with the poached egg worked perfectly. The mushrooms were equally as delightful and full of flavour.

Whilst waiting for our main course we looked at the wine menu which offers varieties to complement any dish on the menu. I was excited for our main courses, as I had chosen the pork wrapped in Parma ham served with a layered potato cake on a pea puree. The vibrant green from the puree added a fantastic visual aspect to the dish and was a lovely accompaniment. I also chose from their extras a bowl of chips with aioli. The whole dish was flavoured well and the pork was cooked to perfection. For his main course my husband chose the special of the day, which was a rump steak served with mushroom, tomato and thick cut chips. I was lucky enough to be able to try his steak and the knife just slid through it. Cooked rare, it simply melted in the mouth.

Although we were both pleasantly full by this time we had been so tempted by the dessert menu earlier on that we knew we had to sample it. We chose the chocolate millionaire mousse cake served with ice cream as well as the sticky toffee pudding. Again, both dishes were perfectly presented and tasted absolutely beautiful.

The menu at the Reform Restaurant changes regularly so make sure you pop in for a visit to sample Simon’s seasonal delights. I know we can’t wait until we visit again.