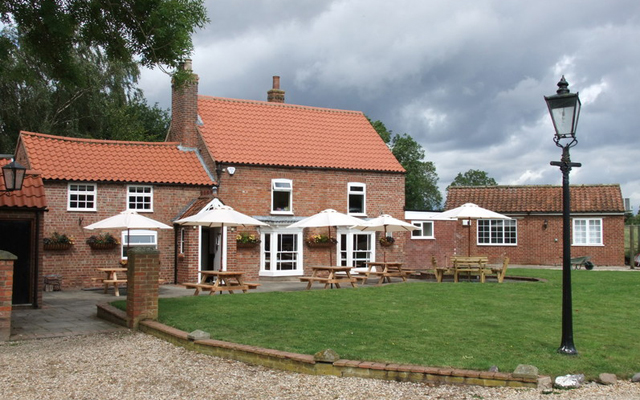 It is heartening to report on a well-known county establishment which was reopened last summer.
The Sebastopol Inn had a good reputation for its food and beers and Minting villagers were so bereft at the loss of another local amenity when it closed in 2010 that they ran a campaign to try to buy it as a community group. That privilege fell, however, to Nick Reed, a chef since leaving school, now with over twelve years’ experience under his apron strings.

Nick’s first job was at Westover Hall on the south coast. Head chef, Neil Johnson, who had trained under the Rouxs at Le Gavroche, taught him a great deal although he also gained valuable experience working in other two rosette kitchens. The time was right to find a place of his own.

“I suppose it was the quality of the produce available in Lincolnshire which attracted me,” explained Nick, “and there are not so many opportunities to purchase a freehold. We love the village and I am still discovering new suppliers and the variety of seasonal produce around here.”

We visited on a Saturday evening and locals were beginning to drift into the bar while other diners were already making their choices.

The pub dates back to the 1830s when a private householder took the opportunity to brew beer and sell it from the premises. It was still called ‘the beerhouse’ until just after the Crimean War when, legend has it, a soldier celebrating returning from that campaign fell into a nearby dyke and drowned. A reference by the Horncastle coroner to ‘this brave infantry man from Sebastopol’ stuck and his image was adopted as the pub sign.

Parts of the snug wall are of the original mud and stud construction, while the remainder of the pub is in red brick and pantile with large Georgian windows overlooking the frontage. It is a quintessential village pub which Nick has invested in refurbishing with a contemporary and cosy interior. We sat by one of the log fires to look through the menu and have a drink before we ate.

There was a choice of five starters, nine main courses and four desserts. It was good to see that Minting Park Farm sourced meat was featured so strongly. To begin, the three of us shared a dish of potted pheasant with caper berries and toast; very delicious and filling in its own right with generous chunks of breast meat. Other starters included soup of the day, smoked salmon platter, deep fried whitebait or fried mushrooms on toast.

My daughter, who prides herself on being a fish connoisseur, opted for the Fish ‘n’ Triple cooked chips with mushy peas for main course. I went for the venison stew and dumplings while my husband had the Aged Minting Park Farm sirloin with triple cooked chips and roast tomatoes. Other dishes on the mains menu included sausages and mash, half a chicken Thai green curry, grilled mackerel fillets, crisp belly pork and aubergine Parmigiana.

My daughter gave lots of praise for her choice saying the chips were the best she had eaten, possibly ever, and that the fish surpassed her usual favourite venue for gourmet fish and chips. My venison stew was rich and gamey with tasty little dumplings – perfect winter evening food. My husband declared the steak a real piece of well-aged meat cooked perfectly to his liking. A dish of piping hot, fresh vegetables accompanied our meals.

We had a pause for breath here as we were all keen not to miss out on the desserts. I went to find Nick in his sparkling new kitchen. It is a perfect set up with all the equipment needed to help Nick create nearly all the food he serves including all his own bread, sauces and ice creams. The Sebastopol has already hosted private parties and the hunt dinner in their larger dining room and Nick is able to cope with these numbers with the help of a plongeur and his efficient waiting staff. There are regular quiz nights and a takeaway fish and chip service for those who would rather eat at home.

Back at our table we tucked into our puddings. I had the salted caramel and dark chocolate tart while my companions had the sticky toffee pudding with salted toffee sauce and vanilla ice cream. We could also have had treacle tart or apple and mincemeat crumble. The desserts were exceptional and rounded off a very enjoyable evening of fine food.

The snug was still busy, with regulars enjoying cask ales and drinks from the bar. I felt a sudden chill as we were leaving. The ghost of that old soldier? No, just minus three degrees in Minting that night.