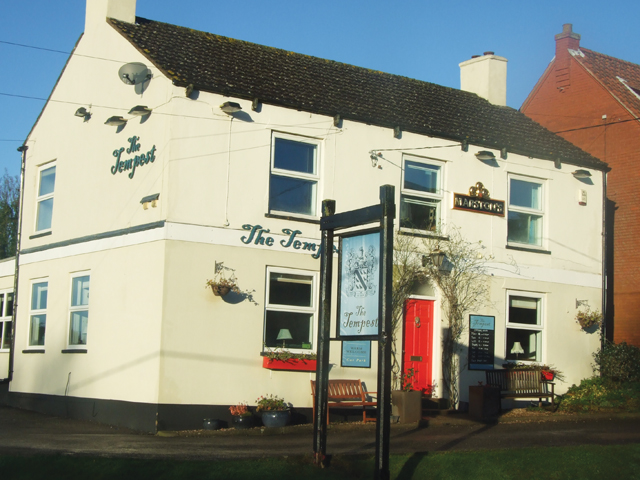 Yes, as in the Shakespeare play, but The Tempest Arms was renamed in the latter part of the nineteenth century, after the Tempest family who owned the Coleby Estate.
Like many of Lincolnshire’s heritage inns the pub began life as a brew house and in the 1840s was known as The Board. Later licensed as The Brewer’s Arms, it became – and has remained – The Tempest Arms in 1888.

The pub occupies a prominent position to the south of Coleby’s High Street with a sweeping view across the Trent Valley from the beer garden. This Best Kept award-winning cliff village of yellow stone-built cottages is popular with walkers passing through on the Viking Way and with those looking for an idyllic country pub for lunch or supper.

We visited The Tempest Arms on a Friday evening and, although we arrived early, inside was already busy with local diners and those calling in for a pint. Everyone was welcomed as they arrived and there was a good buzz of conversation and laughter above the background music. There are also live music nights, details of which can be found via the pub’s Facebook page.

Proprietors Tracy Smith and her partner Derek have been at The Tempest since March 2013 and have worked really hard for the past few months to restore the pub’s reputation for excellent ales, hospitality and of course good food.

Chef, Ed Danby has a wealth of experience earned in metropolitan gastro pubs and hotels and has relished the chance to join The Tempest team, devising menus which offer classic pub favourites as well as a daily Specials Board. The Specials Board gives him chance to flex his fine dining skills with more complex, seasonally inspired dishes. During the autumn and winter months, the local shoot are regular suppliers of game birds. Hard to source more locally than that!

To give us a sample of each of the starters on the menu, Ed had prepared two slates. Mine included a delicious shot of fresh tomato soup, game pâté served with home pickled vegetables and Welsh rarebit served with home-made ketchup. My companion’s offered a smooth butternut squash soup, a slice of smoked haddock and leek tart with crispy hen’s egg and fish goujons served with a home-made tartare sauce. We took the chance to graze from each other’s selection just to give them all a try. Our favorites were the soups, the smoked haddock tart, fish goujons and the fine home-made sauces but we could have gone back for more of everything.

For our main courses I chose a dish from the Specials Board while my fellow diner chose from the main menu. The pheasant breast was served with a bacon and brawn faggot, smoked mash and creamed cabbage while the classic Abbot beer battered haddock and chips was served with mushy peas and home-made tartare sauce.

These were substantial plates of food which we both tried to raise our game to clear. My pheasant breast had retained all of its moisture and flavour and offered welcome seasonal comfort with its accompanying mash and cabbage. The haddock’s fresh white flesh was encased in a perfectly crisp batter and served with a slice of lemon on the side.

For all of the dishes on the mains section of the menu there is the option of a smaller portion (with a correspondingly lower price) for children, or for those with less of an appetite. I think this is a really good idea, so that all of the members of the family can enjoy freshly prepared food when they eat out.

Other dishes on the main menu include Lincolnshire sausages with champ mash, pan fried liver, Lincolnshire blade of beef, 10oz sirloin steak, home-made beef burger, or pie of the day served with chips and seasonal vegetables. Other dishes from the Specials Board included pan fried wild salmon fillet with tarragon crushed potatoes with a shellfish and smoked haddock veloute; or corn-fed chicken supreme with a black pudding croquette and pomme puree.

We decided to share a dessert because we just did not have room for a pudding each. We were tempted by a 70% chocolate torte with warm winter berries or a vanilla and clove panna cotta but agreed on the rhubarb and apricot clafoutis served with a splendid gingerbread ice cream – a perfect way to complete our meal.

It is great to find a public house which has been restored with passion and hard work to its proper place at the heart of a village but the team at The Tempest Arms have also created a hostelry as a destination in itself. Great for lunch or dinner, with plenty of attractive walks right on the doorstep to raise the appetite and menus which will suit every member of the family.