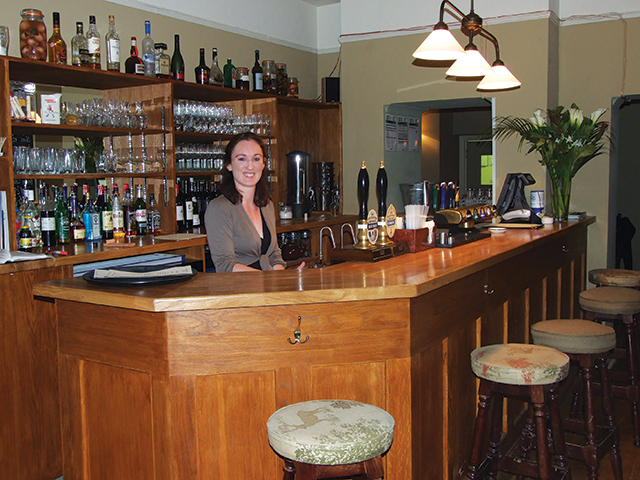 Caroline Bingham visited the Tollemache Arms to meet two couples who have breathed new life into this handsome pub.
The Tollemache Arms is an impressive nineteenth century stone built pub on the Main Street of Buckminster, a charming, peaceful village which lies only a short drive from the rushing traffic of the A1.

We visited on a Saturday evening and already there was the buzz of conversation from locals at the bar and fellow diners looking through the menu. I had visited the pub before and remember that it had been attractively renovated as a modern dining pub and the new owners, Matt and Amanda Wrisdale and Paul and Matilda Adams, have improved it further by moving the bar deeper into the room and having a seating area with a welcoming open fire as you enter.

Amanda greeted us at the bar and got an immediate thumbs-up from my fellow diner for knowing how to mix a perfect St Clements. My gin and tonic was spot on too. Matt and Paul spared a few minutes from their work in the kitchen to explain that they met as chefs in London. Paul is from Essex while Matt is a Lincolnshire lad who grew up on his parent’s farm near Spilsby. The Tollemache Arms had been closed for a year and knowing the area, both couples felt it was the right opportunity to relocate and branch out on their own.

Matt and Paul obviously take delight in how frequently they can adapt their menus, which can be daily, depending on availability of produce and the season but firm favourites linger for longer. There was definitely an autumn feel to ingredients across our evening’s menu: braised hare, squash, salsify, duck, leeks and mushrooms.

I started with fried duck egg and ceps on toast with watercress while my companion chose pan-fired goats cheese with tomato, chilli and walnut salsa. Once punctured my sunny-side-up egg yolk poured over the ceps and bread; very comforting and very delicious. I could have eaten a double portion. I tried a mouthful of the goats cheese too as my companion had really enjoyed the softness of the cheese with the contrast of its thin, crisp breadcrumb coating and tangy salsa.

I kept on the comfort food theme with my main course of baked whole lemon sole, cockles, salsify and red kale while my companion chose lasagne of spinach, ricotta, mushroom and parmesan. My sole was beautifully cooked and I commented to Paul that I would have like to have seen the fish served on top of the salsify rather than the other way round. It was definitely the star of the plate and should have been given its due ranking. I did manage to finish my portion but it nearly beat me. My companion’s lasagne was equally filling with generous quantities of ricotta and leeks as well as spinach.

Desserts were too tempting to resist and I chose the poached pear with ginger syrup and vanilla ice cream. This was a refreshing and light dessert after my substantial main course and the warmth of the ginger worked wonderfully with the pear. My companion chose the exotically sounding cherry clafoutis. Served warm with vanilla ice cream a clafoutis is a cross between a waffle and a pancake but cooked in a mould, glazed with sugar. The comment of ‘absolutely delicious’ from my companion said it all.

We finished with coffee and watched as a couple at the next table to ours were served roast rib of beef for two. Jolly nice it looked too. Paul explained that their first year has already thrown some surprises at them. They had expected to be quieter during the summer months but they hadn’t accounted to grandparents caring for children and looking for somewhere nice for lunch. Children are very welcome at the Tollemache Arms and the Boston Sausage sandwiches were definitely the favourite for them. Grandparents were, I am sure equally pleased with their choice from the lunchtime menu which could include tagliatelle with pea shoots and pine nuts, Moroccan spiced meatballs or roast cod to name only a few. There is a new classic bar menu during the day too which offers extremely good value light lunch options such as braised beef and mash potato, fish and chips and toad in the hole.

Bookings are now being taken for Christmas and the four courses, Christmas Day menu offers traditional turkey as well as saddle of lamb and wild mushroom and chicory tart as main options. Priced at £45 per head this looks like an excellent answer to the stress of Christmas Day catering.

After almost a year at the Tollemache Arms, Matt and Amanda, Paul and Matilda certainly do not regret their investment and the excitement of their new venture is still with them as they source more local suppliers and produce to include in their menus. Their plans do not end there. Their next project will be to renovate the rooms above the pub to create guest accommodation.