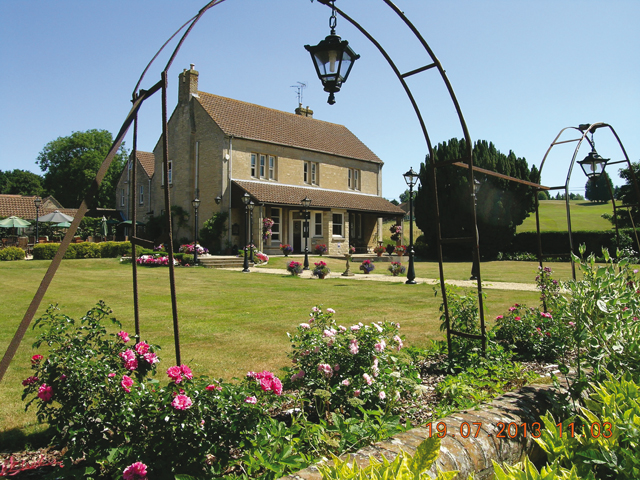 This month I enjoyed a rare winter treat, being invited to Toft Country House Hotel for a spot of lunch. It’s always nice, when the dark nights have set in, to be able to go and explore some of the county’s restaurants in daylight.
The restaurant sits in the small village of Toft, a short drive off the A1 towards Bourne. The building was originally a farmhouse which has been restored and sympathetically brought up to date, without losing the charm of the original building.

When we arrived we made our way past the bar to the reception. We were greeted by the receptionist, who kindly showed us to a table in the bar. It was the peak of lunchtime when we arrived so the bar was busy, with golfers both finishing and about to start a game, as well as guests who had come for a meal. For a lunchtime review we would usually try some of the lighter options, but we were kindly offered the main menu and with so many tempting choices we felt we had to order from it.

Whilst we were perusing the menus, Julia, who owns the hotel with her husband Robert, came to have a chat with us. I always like getting a sense of someone’s passion when they talk about their business, and it never ceases to amaze me the lengths they will go to, to ensure their guests are the number one priority.

Toft Country House is a family business. Robert’s daughter Isobel is the general manager, and her husband Adam is the head chef. Between them, they have many years’ experience in hospitality, having owned other businesses both locally and further around the country.

Although we had decided to treat ourselves to the main menu, we opted not to have starters, preferring to have a dessert. For my main course I chose the belly pork, which was served over caramelised Toft Golf Course picked apples with an apple and sage jus. This was served with vegetables and chips. This is one of my favourite dishes, so I am always quite critical if I don’t think that it has been cooked well, but even though the piece was large it had been well cooked, with a lovely crispy fat. The vegetables were lovely as well. I think my only criticism would be the size. Even for an evening meal, the size of the pork, the extra vegetables and potatoes or chips made for a very large portion. Having said that, if you have been out on the golf course for a few hours, something warm and comforting like this would be very suitable.

My guest chose the Aberdeen Angus beef burger topped with a horseradish and beetroot chutney and melted Long Clawson Stilton, served in a freshly baked brioche bun with dressed side salad, onion rings and chips.

Just reading the description you can imagine the size of this burger, and we were not disappointed. It’s not very often I can get my guest to be quiet, but for the length of time it took him to finish it I never heard a peep. Even though he is not a burger connoisseur, he said it was quite probably one of the best burgers he had ever had. He did say he couldn’t put his finger on what made it so irresistible, but the choice of cheese with the beetroot worked really well together.

Although we had both had large main courses, we couldn’t resist a dessert when offered. My guest chose the sticky toffee pudding, which did exactly what is said on the tin. He said he was pleased they had gone down the traditional route with the pudding. I opted for the Special of the Day, a chocolate torte served with mint chocolate chip ice cream. Again this was served exactly as advertised and made for a great end to our meal.

All in all, we really enjoyed our visit to Toft and would definitely visit again – although I’ve been told next time we have to take our clubs with us.