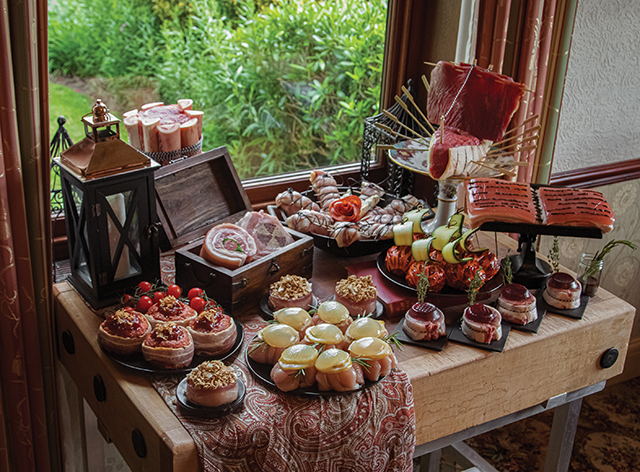 A lifelong passion for food – creating mouth-watering dishes which taste as good as they look – has led to two prestigious award wins for Lincolnshire butcher Ben Tindale. Interview by Kate Chapman.

Ben, manager at G Shearer & Son Butchers, in Holbeach, has been working tirelessly over the past few months, keeping the shop well stocked and customer orders up to date as the country has been in lockdown, but he has still found time to enter two international butchery contests, which were moved online due to the pandemic.

To his delight his intricate work placed first as the judges’ choice in the prestigious Butchers Alliance competition while apprentice Max Crowley’s entry was also ranked in the top ten for the people’s choice award. A few weeks later Ben was awarded the top spot again by judges in the first ever International Butchers Contest 2020.

“I’ve always been passionate about food – I like to create things that are eye-catching, as that gets people talking and means they’re more likely to buy them, but obviously it’s got to taste as good as it looks,” says Ben, who previously worked as a chef.

“We’ve been incredibly busy in the shop, so it wasn’t really the ideal time to think about entering my first competition, but I thought I’d give it a go as it all helps to put the Shearer’s name out there.

“There were strict criteria to follow and when I saw that my work was in the final 25 for the Alliance contest I just thought, ‘wow’, as there were butchers from all over the world taking part.

“It was actually organised by someone in Australia, so the final result was announced on a Sunday night. When they said my name, I jumped out of bed – I was so delighted!”

Ben, who grew up in Holbeach Hurn, began his love affair with food when he started working in a restaurant kitchen while still at school.

“I started off doing tasks like washing up and preparing veg, then I moved on to preparing the starters and side dishes and then after school, I started work there full-time,” he recalls.

“I did my professional qualification on the job, and I got to the top – running my own kitchen – at a very young age.”

Ben was named Lincolnshire Life ‘Taste of Excellence’ Awards Lincolnshire Young Chef of the Year in 2006/7, while working at The Chequers, in Gedney Dyke. Sadly, recession forced the village restaurant to close, but opportunity came knocking when he was offered a job at Shearer’s butchers, where he’d already been working one day a week to gain extra knowledge about meat preparation.

Gerald was a pig farmer, but rather than follow in his father’s footsteps, Mark decided he wanted to be a butcher like his grandfather, who had a shop in Spalding. To help him on the way to his dream, the family opened a shop behind their family home, where customers are still served today.

Alongside Mark and Ben, the shop has five other employees, including two apprentice butchers, plus other casual staff who help out during busier times.

“I enjoy working in the shop – it’s really satisfying to help customers with their choice of cuts and offer advice on what they’re cooking,” says Ben, who took on the role of manager 18 months ago, “that’s what you get when you shop in a traditional butcher’s shop rather than a supermarket – expert advice and great customer service. We can help people choose what is best for what they want to make.

“Mark has really put his trust in me and given me a free rein to bring in some new and different products too. We’ve got lots of exciting things going into the cabinets – things like lamb twists, lamb bombs, chicken pizzas and pork corsets – and we’re getting great feedback from our customers.

“Our barbecue range has increased too; when I first started we offered just a couple of different marinades, now there are over 30 to choose from!
“It’s a fine balancing act – we want to make sure we keep looking after our older customers, who like the traditional cuts we’ve always offered, but we also want to try and appeal to the younger generation too and draw in new customers.”

And of course, Ben is keen to continue promoting the wonderful Lincolnshire produce the county is famed for.

“Lincolnshire has a wonderful food heritage, which we’re proud to recognise and promote. The only sausages we sell consistently are our Lincolnshire sausages – which are made to our own secret recipe, passed down through generations,” he adds.

“Then there’s the haslet, Lincoln Red and stuffed chine which are very popular too – we often find that because of where we’re situated people come over the county borders from Cambridgeshire and Norfolk for the chine and the sausages.

“We even get customers asking if we can share the recipes with their local butchers, so they don’t have to travel! More recently we’ve started making our own pork pies too.”

As for the future, Ben and the Shearer’s team are already planning for Christmas, traditionally their busiest time of year, as well as working through the ongoing pandemic.

“It has been busy for us the past few months. We knew instantly when the supermarkets started to run out of provisions and meat – people just descended on us,” says Ben.

“But we’ve managed to cope, it’s been long hours, preparing orders, and although we do not have a specific delivery run, staff have been dropping things off to customers on their way home to help those who have been shielding.

“We have picked up some new customers as a result, obviously as things start to open up again some of those people have gone back to the supermarkets, it’s inevitable.

“We just want to keep getting the Shearer’s name out there and keep doing what we’re doing – respecting the traditional values of the trade, creating exciting new products and encouraging more people to come and shop with us. I’ll definitely be entering some more competitions too.”

To find out more about Ben and his work follow the shop’s Facebook page: G Shearer & Son Butchers.