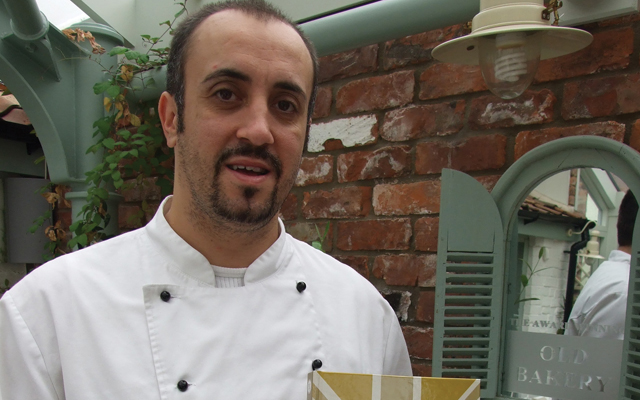 It is eight years since The Old Bakery Restaurant on Burton Road, Lincoln was established and during this time the restaurant has received many accolades and awards for its fine dining and charming accommodation.
The restaurant is a family business, owned by Alan and Lynn Ritson, their daughter Tracey and her Puglian husband Ivano de Serio – the chef. They have become quite accustomed to entertaining celebrities visiting the city and appearances in the Good Food Guide and Michelin Guide. Each month Ivano contributes seasonal recipes to Lincolnshire Life which feature locally sourced produce and are the foundations of a guaranteed-to-impress dinner party. Now Ivano has stepped temporarily out of the heat of the kitchen into the glare of television lights with an appearance on ITV1’s ‘Britain’s Best Dish, The Chefs’ which will be aired this month.

Filmed in Birmingham in September, Ivano was chosen to represent Lincolnshire and was the only chef from the East Midlands. His dish of Roasted Ostrich Fillet with Cauliflower is typical of his fusion style, using ostrich fillet locally sourced from county producer, OsLinc.

“Many chefs are taking part in this competition and I wanted to create an exclusive dish which would use some of Lincolnshire’s fantastic produce,” Ivano explained. “People are not so aware of what a healthy and tasty meat ostrich is. This was a great opportunity to create a new dish to showcase it.”

Filming also took place in Lincoln at The Old Bakery. As part of the audition process, Ivano made an individual chef tape which is being used as one of the online cookery demonstrations and tips to accompany the series.

You can see how Ivano got on when the episode is broadcast on Wednesday, 7th December at 5pm on ITV1.

There is a book to accompany this series featuring recipes from all of the chefs who took part. It is on sale priced £20 from leading bookshops and supermarkets, or you can buy a copy from The Old Bakery Restaurant signed by Ivano at the special price of £18.

Further information about the series ‘Britain’s Best Dish: The Chefs’ can be found at www.itv.com/food or www.thegoodfoodguide.co.uk

A new innovation for 2011 at The Old Bakery Restaurant has been the opening of the Old Bakery Deli. Each day home made breads and desserts are prepared at the restaurant and now these can be bought to take away or be delivered locally.

Breads and pastas are prepared without the use of chemicals and preservatives. There is fresh fish and organic Lincolnshire vegetables. Why not try homemade pates, terrines or salads? Drop in for an individually made sandwich to take away for lunch or treat yourself to one of the desserts to finish off your evening meal.

“Our aim has been to make the same fine foods that can be enjoyed in the restaurant available for people to buy and take home. We import olive oil from San Paolo di Civitate, my family village, and there is balsamic vinegar and other Italian delicacies,” Ivano explained.

The newest addition to the Deli range for Christmas are mouthwatering chocolates which can be gift boxed for a special present. If you want some advice about the use of produce, or recipe ideas, Ivano and his team are on hand to help. The Deli is located in the front section of the Old Bakery Restaurant at 26-28 Burton Road, Lincoln LN1 3LB.