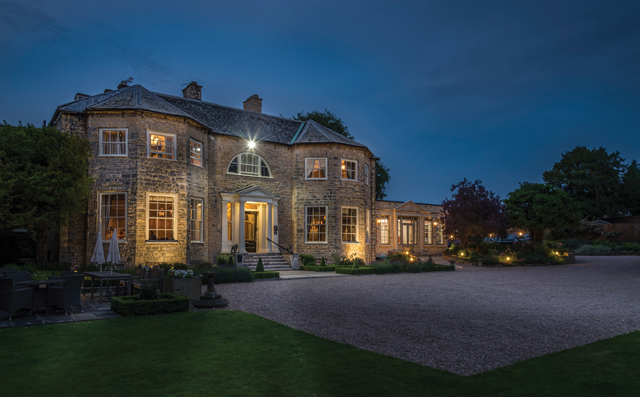 The first outing of the New Year took me to the winner of the 2015 Taste of Excellence Wedding Venue of the Year, Washingborough Hall Hotel.
Those of you who have visited in the last couple of years will have seen some of the work that owners Edward and Lucy Herring have implemented in this Grade II building. Since their arrival eight years ago they have carefully, and meticulously, upgraded the whole hotel from the bedrooms to the communal areas and 2015 saw a new addition to the hotel, with an extension known as The Winston Room.

It was a very chilly night for our visit. When we walked in we were greeted by the roaring log fire, and to be honest I could have just stood in front of it all night. However, we were taken through to the main bar area. The features in the room have been carefully restored, including the original shutters and sash windows, and the colours and décor have been completed very carefully in keeping with the style of the building.

Our orders were taken and we were able to make the most of the room before being led through to the Dining Room. Our seats were in front of the windows overlooking the lawn.

For my starter I chose the roast pumpkin, butternut and chorizo soup – although I opted for the vegetarian option, without the chorizo – which was lovely, warming and full of flavour. I’ve never been one for soups but the flavours that are appearing on menus are very tempting, and this was no exception. With a couple of slices of homemade bread it was a delightful dish to start the evening. My guest opted for the pan-seared woodpigeon with a pancetta and wild mushroom risotto, white truffle oil and parmesan. It’s not very often we get to go out and taste some lovely game so he was especially looking forward to it. I always ask for some feedback to help when it comes to writing the review and this time I had to wait until he had finished the whole plate before he came up for breath. I took this as a good sign, and he couldn’t praise it enough. From the way it was cooked through to the flavours, the pigeon was definitely the star of the dish – my guest said he only wished there was more, simply because he enjoyed it so much and no reflection on the portion size.

Our mains were served quite quickly after our starters and I opted for the fillet of beef with Café de Paris butter, pont neuf potatoes and heritage tomato ketchup. As someone who thoroughly enjoys a piece of steak, I am very wary of ordering it in restaurants as so often it can be disappointing. I like my steak to be on the rare side of rare, pan fried for as little time as possible with plenty of seasoning. I was very impressed that this is what I was served. The fillet was tender with the knife simply slicing through the meat with no effort from me. The steak was served with pont neuf potatoes, which I found out very similar to large homemade chips, spinach and potatoes with cubes of beetroot. All in all, a very splendid dish, presented well on the plate.

My guest stuck to his game theme and chose the guinea fowl, which was served with a chestnut and stage stuffing and a lentil and barley broth. I haven’t had guinea fowl before and I wasn’t able to taste it this time either, as I was told it was too good to share. This time the feedback I got was that it was lovely and moist, full of flavour and served with accompaniments that worked really well.

We decided to take our time before ordering dessert.

Having a break gave us time to take in the atmosphere. Aside from ourselves, there was a large group celebrating a significant birthday and a few other smaller tables.

By the time our dessert orders were taken, we were looking forward to what would be served. I had opted for the After Eight chocolate fondant with a white chocolate ice cream and my guest went for his firm favourite, sticky toffee pudding with clotted cream and butterscotch sauce. My fondant was made to order and when it arrived it looked very tempting. The flavour of the After Eight was powerful all the way through, and served in a Stokes Coffee espresso cup it looked perfectly well presented on the plate. The white chocolate ice cream was a brilliant accompaniment and the dish finished the meal off perfectly. The sticky toffee pudding was also presented well and tasted beautiful.

We decided after the meal to take our coffees back in the main bar and met with head chef Dan Wallis. It is always nice when the chefs come out and talk to us and can give us some background to their careers and where their inspiration comes from.

Dan has been at the hotel for sixteen years, after his former head chef moved to the hotel and brought Dan with him. In that time Dan has worked up the ranks, taking the helm eight years ago. Since Edward and Lucy bought the hotel seven years ago, the partnership between them has meant Dan has been able to introduce new ideas to the menu, making the most of Lincolnshire’s seasonal produce. He was quick to point out that none of it would be possible without his kitchen team, all of whom play a vital role.
Washingborough Hall is definitely a destination restaurant which is well worth a visit. Its popularity for hosting private parties and weddings for up to 110 in its myriad of characterful rooms seems to be an extremely popular way to enjoy this fabulous restaurant with friends, family or business associates.