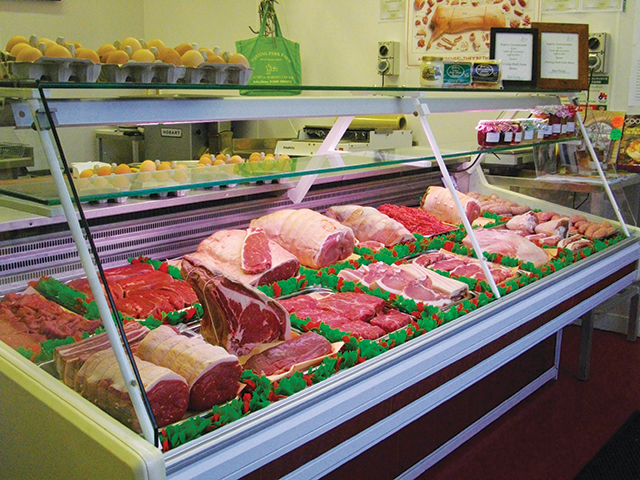 Minting Park Farm, in the Lincolnshire countryside, is a family run 600 acre mixed farm. It has been almost 30 years since Henry and his family moved to Minting Park Farm from Essex.
With farming in his blood, the farm is a real labour of love, and is now home to 90 breeding cows, 75 breeding ewes and 10 British Lop sows, as well as growing grass and lucerne, wheat and barley.

Their farm butchers shop opened in December 2006 to market their own beef, lamb, mutton and pork. Using a local abattoir, the meat is then brought back to the farm and matured in the chiller before being butchered and sold in the farm shop. Their motto is ‘Born on the Farm, Grown on the Farm, Sold on the Farm’. Other products include their own free range eggs, local honey, rapeseed oil, real ales and ciders, and homemade preserves. They also make their own award-winning sausages and dry cure their own bacon, gammon and ham from their home bred pigs. Since opening, Minting Park Farm has won over 50 awards for their produce.

In November 2015 they opened the Farmhouse Kitchen, where they produce and sell a wide range of cooked products, to include pork pies, steak pies, sausage rolls, black pudding, cooked meats and cakes using homegrown ingredients.

A new addition is ‘The Harness Room’ where visitors can enjoy a bite to eat, tea, coffee and homemade cakes.

This December will be the 10th anniversary of the opening of the farm butchers shop and plans are being made to mark this occasion, so watch this space!

In early June this year Minting Park Farm opened its gates for the annual Open Farm Sunday, and was the third year the farm had hosted this event organised by LEAF (Linking Environment And Farming). Over 300 visitors called in to the farm. Adults and children alike had the opportunity to see how the family care for the animals and also meet some of them. There were various competitions, including a quiz, guess the weight of the bull and the boar pig, all with great prizes! The next Open Farm Sunday will take place on 11th June 2017.

Minting Park Farm is open Thursday and Saturday 9am–4pm, or by arrangement. For more details visit www.mintingparkfarm.co.uk, follow the Facebook page or call 01526 398373.