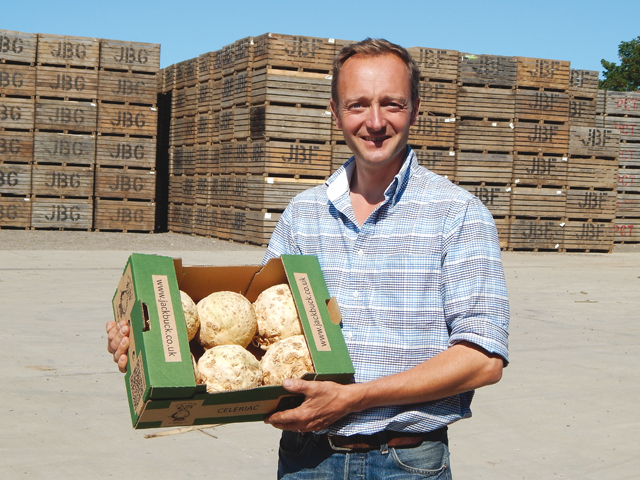 It may not be the most attractive looking vegetable, but celeriac is very much to the taste of one CLA member farm in Lincolnshire that is enjoying success with this demanding crop.
‘Beauty is in the eye of the beholder’ is a phrase steadfastly endorsed by Jack Buck Farms. Celeriac is one of its key crops and, while it may be delicious and incredibly good for you, it certainly wouldn’t end up on your plate if it was down to aesthetics alone.

In addition to its lack of good looks, it’s a tough vegetable to produce and store successfully. The fact that the Moulton Seas End business is not only growing it, but has become one of the UK’s biggest producers of the vegetable is proof of the skill of CLA members the Buck family and the farm’s managing director, Julian Perowne.

They absolutely revel in the fact that they have carved out a niche market for this versatile vegetable – which is seen as a sophisticated flavour alternative to potatoes and turnips – and have created a brand: The Ugly One. They’re rather proud of it, and rightly so.

“The branding is aimed at the wholesale market and gives us valuable differentiation,” says Julian. “We’ve recently given the brand a revamp and given our mascot Union Jack wellies.

“There has been a big crop to sell this year. Coupled with big crops in Europe, it has been an oversupplied market. Prices have been below average, so the branding was reintroduced this year after an eight-year break in order to give the product an extra boost in heightened competition.

“The main challenge is from Holland, which is a major exporter of celeriac to other parts of Europe – including the UK,” says Julian.

Of the farm’s 1,600 acres of cropping this year, celeriac takes up 220 acres. It’s one of eight crops, with daffodil bulbs and flowers and potatoes the other main intensive crops on 260 and 300 acres respectively. The rest of the farm’s land is taken up by peas, onions, fennel, wheat, and sugar beet.

Early crops of celeriac are in the ground for four months – April to July – and then lifted and sold usually within forty-eight hours. The crops for storage are grown much slower and in the ground six months.

“We want to be the best celeriac producer we can, that’s key, and we also want really high quality daffodil flowers – it’s a growing market and we want to be right in there,” explains Julian. “Everything has to be up to the best quality, because quality always sells even in a depressed market.”

The Dutch are the yardstick used to measure the farm’s success, and it’s quite obvious that while Julian wants to get his nose in front of his European neighbours he utterly respects the way the country’s businesses grow, store, export, and market celeriac.

Julian is making a trip across the North Sea in September to study the competition in Holland and see how he can implement some of what they are doing into his work in Lincolnshire.

“They are so good at doing things with minimal labour cost, keeping the attention to detail, and being very organised,” he says. “If we want to compete on price and sales, then we need to match them. They are great exporters and they have a huge dominance in a lot of vegetable lines.”

Julian came into the business in 1995 as a management assistant to Robin and David Buck, fourth-generation farmers, to help them farm their family’s land. The Wye College graduate worked his way up to the position of director before a company reorganisation saw the business split into a land holding company and a farming business, of which he is now a shareholder.

Robin and David’s father Jack, after whom the business is named, experimented with a wide range of crops and set the tone for continued innovation and creativity on the farm.

“Jack Buck liked to have something to sell all the time, and not have all his eggs in one basket,” says Julian. “We still achieve that aim; we still sell something all year round, which is good for cash flow, but we are not over reliant on one crop. We still try and spread our risk.”

However, while the farm has eight crops, it had more in the past, with thirteen in 2008. Julian has stopped growing chicory, radicchio, artichokes and cabbage in order to streamline the business and keep it competitive in the right areas.

“The problem in the industry today is that you either have to be a specialist or have quite a large volume. With those products we weren’t competitive – with cabbage we needed to be ten times bigger – and it was diverting our attention from elsewhere,” says Julian.

“As resources get more stretched you have to think about what you’re doing. In the end you can do more of the same crop more easily than you can do little bits of extra crops.”

While those on farm and in the industry will look back and remember Jack Buck as an innovator, Julian appears to be a forward-thinking moderniser who is doing much to ensure the farm operates successfully in the twenty-first century, both locally and internationally.

Those who only see what is going on in the fields would be amazed to know the thought, investment and technology behind the growing of the vegetables that end up on their dinner plates. Julian reveals the investment in new washing and packing equipment for the celeriac alone amounts to a “six-figure sum”.

He explains: “We can make our lives easier and become increasingly more efficient by investing in the best equipment, increasing our productivity. This means investing in the latest GPRS systems for tractors, the latest machinery, and just keeping up to date with what’s happening in the industry from a technological perspective.

“We put the first reservoir in two years ago, using abstracted ground water and a technique involving seepage pits. It’s been very successful and we’re now in the process of building a second, which is twice the size.

“We’re putting in irrigation main, which is extremely costly, but will allow us to pretty much irrigate the whole farm, apart from a few outlying fields. The reservoirs also help in making sure yields are high and that we get the right skin quality on the potatoes the farm produces.

“We’ve also installed a water capture system with twenty-five tonnes of holding capacity to secure rainwater for use in the celeriac washers.

“Celeriac isn’t easy to store, hence why we want to invest in better storage and the latest technology so that we can keep up with growers in Holland. The improvements will make a difference to all our main three crops; the investment in irrigation and storage will benefit potatoes for sure, and irrigation will help the bulbs if we had a really dry summer.”

And it’s not just equipment being refined – despite its success, even the celeriac being grown on-site is being constantly reviewed. The farm currently has two celeriac varieties on trial as Julian seeks to find uniformity, and improve brightness, shape, and taste – there is a chance the Ugly One might well undergo some cosmetic surgery.

Julian says: “Twenty years ago it was very pointed, but it has got rounder and it is now more of a football shape. We want a better looking celeriac that is more visually appealing – we don’t actually want to make the Ugly One uglier.”

To find out more about Jack Buck Farms visit: www.jackbuck.co.uk