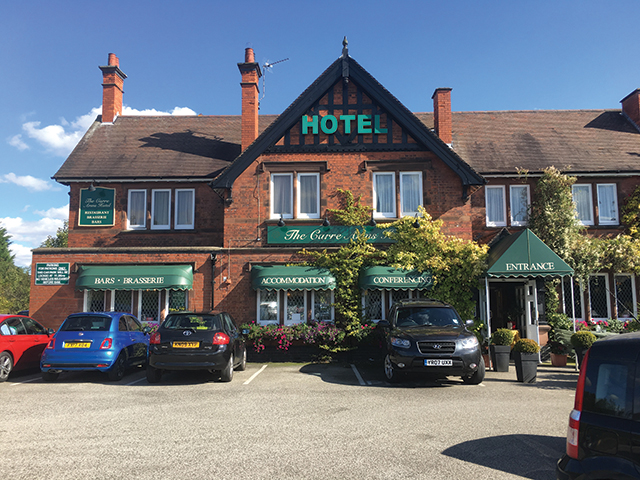 This month we were invited to visit the Carre Arms Hotel in Sleaford.
The Carre Arms has been under the ownership of Lisa Cunago and her family for almost thirty years, and in that time they have created a venue that sympathetically retains the character of the original building.

We were greeted by Lisa and her team and after ordering our drinks we were shown through to the covered courtyard. Bursting with colour, with the sun shining through, Lisa has made this a truly spectacular all year round venue using modern design to show the character of the original building.

Lisa and her husband Michael took me through to their wedding room which is also part of the old courtyard. It was great to see how their restoration has given it a contemporary yet traditional feel.

Whilst looking at the À La Carte menu it was fantastic to see how many choices were available, including a Specials Menu, and all the flavour combinations looked appetising. We opted for only a two course lunch, but some of the starter options included soup of the day, smoked salmon with poached eggs Benedict and baked Camembert with honey and walnuts.

I finally settled on the pan roasted lamb cutlets, which were served with warm new potatoes, mangetout, green bean salad with a garlic and mint alioli dressed salad. This was the first time I had chosen a dish that came with vegetables and salad but the flavour combinations were exquisite. The lamb was perfectly cooked, with just a hint of fat to add that last burst of flavour. The green bean salad and mangetout were perfectly crunchy and the salad leaves and dressing added a new level.

My guest opted for the red bream fillet with red onion, cherry tomatoes, sliced baby potatoes and peas. The dish was served en papillote, an Italian style of cooking when the food is placed in a pouch or parcel and baked blind. It is a high credit to their kitchen team that the fish was perfectly cooked. The fish slid apart and the flavours were a beautiful combination.

Although we were sufficiently full from our main courses it would have been rude to not sample the desserts. The dessert menu is created each day and we opted for the lemon chessecake and chocolate salami roll. The lemon cheesecake was, in my guest’s opinion, dreamy. It was full of flavour, had the lemon taste without any bitterness and beautifully presented. The chocolate salami roll is of Italian origin and is made using dark chocolate and amaretti biscuits formed into a long roll and sliced.

After we had let our meals settle, Lisa took us for a tour of the hotel, showing us a selection of their rooms which have recently been updated. The location of the hotel is next to the train station, so is perfect for those visiting for a day or longer.