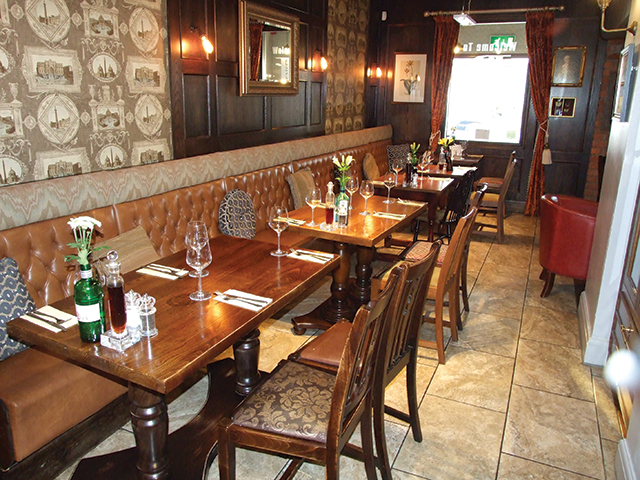 This month we visit Dexters Alehouse & Kitchen in Lincoln.
Dexters Alehouse opened in late 2015 on the former Lincolnshire Red premises. For those who either live or have spent time in Lincoln in the last few years, the building has hosted a range of eateries and late night entertainment venues so I was looking forward to seeing how it had been refurbished to suit the current business.

Before we arrived I had looked at the website and noticed the company Fine Leisure also owned several other restaurants in the north east of the county.

When we arrived we were welcomed by a member of staff who showed us to a table near the back of the restaurant. The décor has an old-meets-new style, with classic black chandeliers, red velvet curtains, lamps made from traditional mining lamps and wood panelled walls. Although this might seem an eclectic mix, it does come together and works really well. There are also TV screens, which allowed us to keep an eye on the Olympics during our meal. We were sat on a table with two longline bucket chairs, which did make it difficult to sit close to the table.

After we were seated we had our drinks order taken. On arrival I noticed the restaurant offers a bottle of Prosecco on a Friday for only £10.95, so we decided to try this. The menu had plenty of options and for our starters we opted for the wedge of brie and battered king prawns. My brie was lovely. It had been deep fried in a lovely batter, although the middle was still very hard and cold, so perhaps needed a couple more minutes. My guest’s choice of the prawns was a good one, being extremely flavoursome, and the salad garnish that both were served with had a lovely dressing.

Our mains were next to arrive and it was clear to see that the restaurant staff work well with the kitchen staff, as the course didn’t take long to arrive after our starter plates were cleared. As it was a Friday I chose the battered Grimsby haddock which was served with mushy peas and homemade chips. The fish was beautiful; it just melted in the mouth and slid on the fork perfectly. The homemade chips were something else. Even though they were quite possibly the largest chips I have ever been served, they were cooked really well and the mushy peas just reminded me of walks along Skegness seafront.

My guest opted for a ribeye steak served rare. I am always cautious about ordering steak in a new place, having had some disasters in the past, but the meat was cooked to perfection and was beautifully tender. Again, this was served with homemade chips, grilled tomato and mushroom and a peppercorn sauce. The feedback from my guest was very positive.

The menu has a mixture of pub classics including liver and bacon, burgers and pies whereas the steak menu includes cuts such as rump, fillet and T-bone.

As the first two courses had been very swift, we decided to take our time before ordering dessert and caught up with some more of the Games. Eventually, after we convinced ourselves we had room, we had a look over the dessert menu. With only six options it was easier to make a decision and I chose the chocolate brownie, while my guest opted for the cranberry and walnut cake with toffee sauce. Both were served warm and were very enjoyable.

Aside from the menu we were given the restaurant also has a specialist steak board which features larger speciality steaks such as a 48oz tomahawk and 40oz chateaubriands.