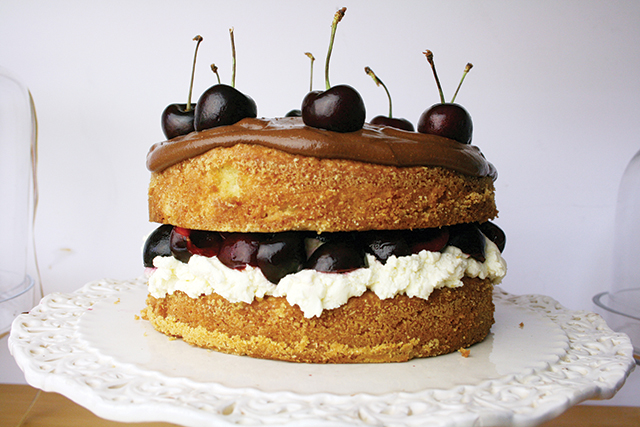 Ingredients for the filling:
400ml double cream
1 tablespoon cherry brandy or kirsch
A large punnet of cherries – halves and pitted – reserve 8 whole with stalks for the top
A little raspberry jam

Now that the good old British ‘summer’ is winding down and I’ve put a huge effort into perfecting my bikini body, I feel like I can let it go a little and spoil myself with a something naughty.

Cherries are absolutely stunning at the moment, sweet and sharp and fat and juicy and so dark they bleed the most gloriously gory blood red and stain everything. You don’t really need the cherry brandy in this but I’ve used just a drop and just a drop lifts the whole cherry taste to somewhere rather special and if you’re going to eat this much butter and sugar then why not make it extra special?

What I love most about this cake is that it looks so wonderful but really it’s such a basic layer cake with some nice ingredients in the sponge mix to add a little flair to the cherry taste. A celebration of the end of summer and an ideal cake to wow the judges in any local fayres you may be attending!

METHOD
Pre-heat the oven to 170C and grease and line two 20cm loose-bottomed cake tins and then dust the inside edges with ground almonds.

Measure out the flour and ground almonds, mix together and set aside.

In a large bowl or a stand mixer, beat the butter and sugar until beautifully light and creamy, then add 1 egg and beat in followed by a third of the flour mix, then the next egg, beat in and another third of the flour mix. Add the orange zest and cherry brandy, followed by the final egg and remaining flour and beat together until you have a soft dropping batter mix (a little drop of milk will help slacken if it’s too thick).

Divide evenly between the two cake tins and bake on the middle shelf for 20 mins or until golden and risen and a skewer inserted comes out clean – set aside to cool completely.

Make the ganache by heating the cream and cherry brandy in a pan then once it’s pipping hot but not boiling take it off the heat and add the chocolate. Stir until it has melted then set aside.

Beat the cream until thick and fold in the cherry brandy.

Assemble the cake by spreading some jam onto the top of the first layer, followed by the cream. Place the cut cherries on top, then spread a little jam on the underside of the top layer and carefully place it on top.

Spread the thickening ganache onto the top of the cake – don’t be afraid to let a little dribble down the sides – then add the whole cherries with stalks on top.