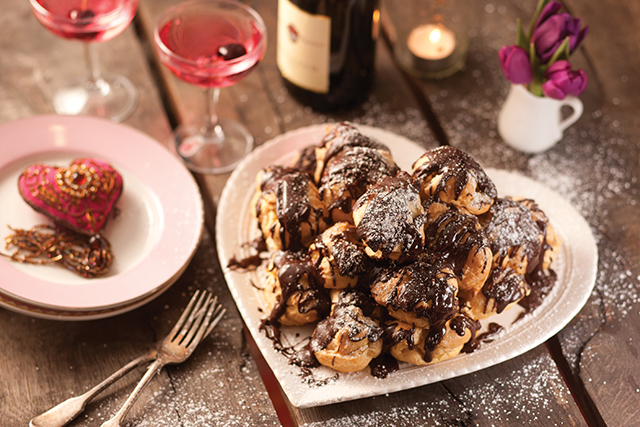 Method
Sift the flour into a bowl and stir in the caster sugar.

In a saucepan, heat the water and the cubes of butter over a low heat until the butter has melted. Once melted, increase the heat and bring to the boil. Immediately take the saucepan off the heat and quickly beat in the flour and sugar mixture until the mixture comes away from the side of the pan. Gradually add the eggs, a little at a time, whilst continuing to beat the mixture until you have a smooth glossy paste.

Grease a couple of baking trays and dampen with a little water (this helps to create a little steam whilst in the oven). Place teaspoons of the mixture onto the trays and bake in the oven for 20 minutes. Remove from the oven and prick each profiterole with a skewer to allow the air to escape. Reduce the temperature to 180°C and return the profiteroles to the oven for a further 8 minutes or until golden brown and crisp. Allow to cool on a wire rack.

Whilst the profiteroles are cooking, make the chocolate sauce and the espresso cream.

Put 600ml of cream into a mixing bowl along with the espresso and Kahlua (if using) and whisk to the firm peak stage. In another bowl, in a microwave, carefully heat the chocolate with the remaining 150ml of cream and icing sugar until melted. Stir to combine. If the sauce is too thick, add a little water to thin.

Fill the profiteroles with a dessertspoon of the espresso cream, stack onto a serving plate, pour over the warm chocolate sauce and dust with a little icing sugar.