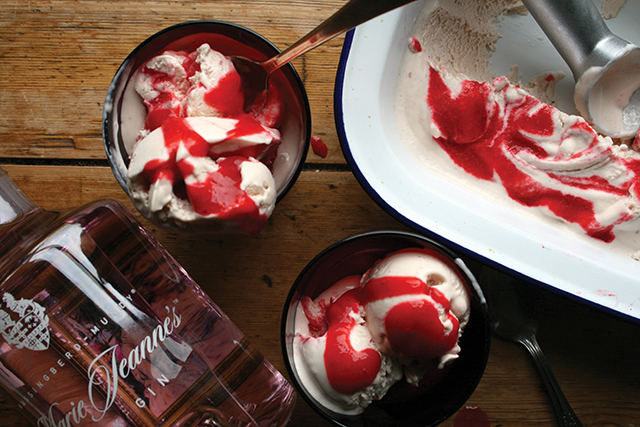 As many of you will know, I’m a big champion of local producers and we are surrounded by some of the best in the UK (sorry Cornwall). What I didn’t know was that we had a global, multi-award winning gin brand literally a couple of miles from my front door! By Dominic Franks.

I was fortunate enough to meet with the brilliant gin distiller Tristan Jørgensen, who created both the Burrell’s and Marie Jeanne’s gins from scratch in his little distillery (basically a shed in his back garden). What an amazing guy! Having ‘cut his teeth’ in the distillery world working at a whisky distillery on the island of Islay in Scotland he then discovered the guys at the South Ormsby Estate in Lincolnshire. They wanted to start a small-batch artisan gin and it was like a meeting of minds.

CHARLES BURRELL MASSINGBERD AND MARIE JEANNE RAPIGEON
A couple of years later and these two stunning gins were born. First the Burrell’s which is a classic ‘London Dry’. It is named after Charles Burrell Massingberd and inspired by his desire to combine a fresh, modern taste with traditional elegance. A man of vision and style, Burrell became the squire of South Ormsby Estate in 1802, redesigning and expanding his ancestral home in the centre of the Lincolnshire Wolds.

The second was the beautiful blush pink gin, Marie Jeanne’s. This gin is inspired by Marie Jeanne Rapigeon of Versailles, who took charge of the Estate and transformed it for the better. Bringing Parisian elegance to South Ormsby Estate, Marie Jeanne was as sophisticated as she was glamorous. Daughter to a French Captain, the young second wife of the squire Charles Burrell, Marie Jeanne was a bold woman who defied expectations.

My tribute to the stunning and heady notes of strawberries and raspberries found when you open a bottle of Marie Jeanne’s is this wonderful raspberry and strawberry gin ripple ice cream. I’ve steeped the fruit in the gin overnight so each vein of the ripple has quite a punch to it but it really is so wonderfully refreshing. Perfect for a summer picnic on the lawn!

This is a total ‘cheats’ ice cream. I’m using a vanilla custard base and then swirling the ripple in but I’m not making the custard from scratch, instead I’m using a luxury readymade custard mixed with double cream. It’s disgustingly good and so unbearably easy, I feel slightly guilty admitting it but here we are!
I’m using my ice cream maker that churns the ice cream but the whole thing can be made in a freezer-proof container.

METHOD
• Place the fruit into a container, stir in the gin and let it marinade overnight in the fridge.

• The next day, use a NutriBullet or hand blender to whizz it into a smooth pulp.

• In a large bowl beat together the custard and cream until combined and slightly frothy. If you’re using a churn ice cream maker, turn on the paddle. Pour in the custard base and let it churn until frozen – at least 30 mins. If you don’t have a machine, pour the custard base into a container with a lid. Freeze for at least 4 hours, taking it out of the freezer every 30 mins and stirring well.

• Once solid, take it out of the machine and place in a large container so you can spread it out. I use a metal baking tray that also fits in my freezer. If it’s beginning to soften, place it in the freezer for another 30 mins.

• Spoon a layer of ripple fruit pulp over the top of the ice cream. Pop it back into the freezer for 20 mins. Once it’s slightly frozen, use a skewer or a spoon to ripple it into the ice cream. Make sure not to over ripple it.