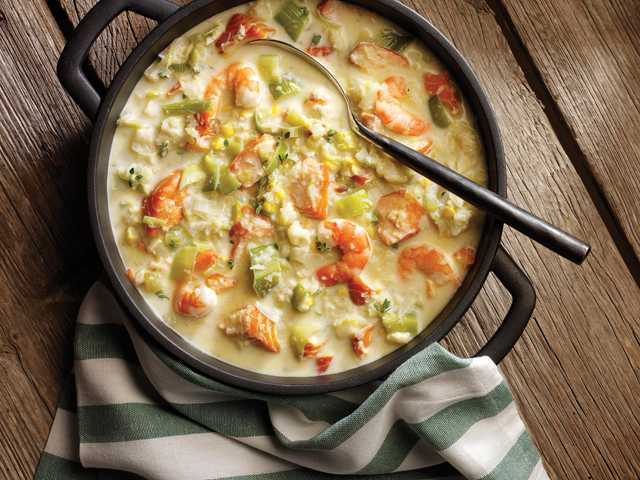 There’s been a lot of rain here in the UK but there has also been that all-important ground frost early in the morning and it’s this frost they say that tells the farmer when the leeks are finally ready for the harvest. Apparently the leeks need that short, sharp shock of frost to ensure they are at their most tasty and perfect. Of course, I have no idea if this is true but I like the idea that traditionally the weather and change of seasons is what would have led the farmer’s choices, with nature giving him the cues as to when it was time to pick his crop. It’s all very different now and indeed the weather patterns have probably entirely changed since the days when the first frost became an indicator but the leek season is very much still through the winter months, which is when they’re at their very best.

This is my favourite healthy soup which proves that January diets don’t have to be boring! It’s rich, thick and creamy soup, inspired by a visit to San Francisco. To reduce the carbs, I’m using cauliflower instead of potatoes to thicken, but essentially the recipe is the same as the classic clam chowder – although of course I’m using a local hot smoked Welsh salmon instead.

METHOD
Add a generous knob of butter and a little olive oil to a large pan and gently sauté the onions until soft, then add the leeks, cauliflower and celery, place a lid on and sweat until all the vegetables are soft.

Add sweetcorn, stock and the milk to the vegetables and let them simmer for 10-15 minutes. Using a spoon take out one third, blend with a hand-whizzer and return to the pan before adding the flaked fish. Stir with a little more olive oil and let it cool slightly before serving.