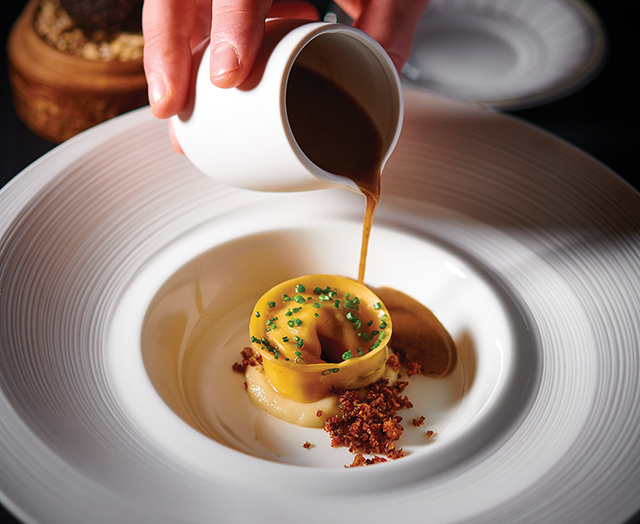 Utilising two of my most favourite ingredients, Jerusalem artichokes and winter truffle, this dish is a little bit challenging but worth every minute spent in the kitchen.

METHOD:
PASTA
• Accurately weigh the flour and place in a stand mixer. Weigh the water, add saffron and bring to the boil, then pass through a sieve and cool. Weigh the eggs, mix with oil and add the saffron water. Add the egg mixture, very slowly, into the stand mixer until fully incorporated. Once a firm dough is achieved take out of the bowl and place on a clean surface and knead until it becomes smooth and elastic.

JERUSALEM ARTICHOKE PUREE
• Peel and thinly slice the artichokes, place in a pan with the butter and cook without colour until soft. Add milk and salt, bring to the boil, drain off milk and place cooked artichokes into a jug blender or food processor. Blend until very smooth, adding milk gradually, enough to help blend. Finally season the puree with the rest of the ingredients. Chill until needed.

TORTELLINI FILLING
• Roast the artichokes in oven at 180 degrees until soft, around 20 min. Leave the artichokes to cool, then cut in half lengthways and using a spoon scrape the flesh from the skin (reserve skin for crumb). Roughly chop the flesh and fold through other ingredients. Weigh into 20g balls, chill until needed.

JERUSALEM ARTICHOKE CRUMB
• Place the reserved skins from the tortellini filling onto a tray and cover with a little oil. Bake in a 120 degree oven until crisp and dry, this is best done overnight. Once crisp leave to cool and roughly chop and season with a little salt.

BLACK TRUFFLE SAUCE
• Start by soaking the dry mushrooms in the boiling water for 1 hour. Drain the mushrooms but reserve 300ml of the liquid to use later. Finely chop the button mushrooms and sweat them down in the butter, cook with plenty of colour until deep golden. Add the thyme and garlic and cook for another 5 min. Add the rehydrated mushrooms to the pan and continue to cook with more colour. Add the mushroom stock and equal amounts of water and bring to a boil and cook for 20 min. Pass the mixture through a sieve, squeeze the mushrooms to extract all the flavour and discard. Add the parmesan, truffle and truffle oil, season with salt and wine reduction. To thicken the sauce, mix the arrow root with a little water and pour it slowly into the boiling sauce until the desired thickness is achieved.

ASSEMBLY
To build the tortellini, roll out your pasta on a pasta machine until thin, about number four, then cut into large squares. Place a 20g ball into the centre of the square, fold one corner into the other and press firmly to seal in the filling and push out any air. This should now look like a triangle, have the flat edge of the triangle facing you with a point facing away from you, fold the tortellini in half by taking the right point over to the other point and press firmly, this is now a tortellini. Keep going until you have made enough. Place on a tray lined with semolina or fine polenta, rest in the fridge until needed. To plate, reheat the sauce, and puree in separate pans, and bring a pan of water to the boil. Cook the tortellini for 2 min in simmering seasoned water, drain on kitchen paper, place a spoonful of the puree in the centre of a dish, put one tortellini on top and pour the sauce around then top with the crumb.