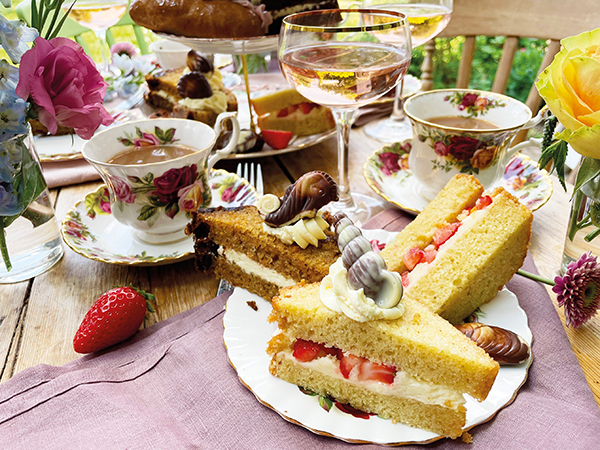 It’s Jubilee month and whether it’s a street party, a picnic or just a gathering at home, let’s celebrate in style. What could be a more thoroughly British way to celebrate the Jubilee than a ‘Champagne High Tea’?

I’m serving mine with these ‘cakewiches’ which are a playful take on the classic sandwich – but are they sandwiches or are they cake? There’s a white bread sandwich with a jam filling, a brown bread sandwich with a cream cheese filling and a wholemeal sandwich. There’s even a classic ‘lobster roll’ filled with Marie Rose sauce! All topped off with the finishing touch of a Guylian Belgian chocolate seashell!

METHOD: Victoria Sponge and Chocolate Sponge Sandwiches
To save time and effort, make this as one large mix then divide into two equal portions. Add the cocoa powder to one portion.
• Preheat the oven to 180°C/Gas 4/fan 160°C.
• Grease and line two 2lb loaf tins.
• Cream together the butter and sugar in a large bowl until pale and fluffy – a stand mixer will make light work of this.
• Add three eggs and half the flour and beat until smooth, then add the last three eggs and the rest of the flour and beat again until smooth and light. Add the vanilla and beat one final time.
• Now pour half the cake batter into one of the loaf tins and smooth off the top. Add the two tablespoons of cocoa to the remaining batter and beat well, then pour this into the second loaf tin.
• Bake both cakes for 35-40 minutes until golden brown and a skewer inserted comes out clean, then set aside to cool.

Carrot Cake Sandwich
• Preheat the oven to 180°C/Gas 4/fan 160°C.
• Grease and line one 2lb loaf tin.
• Tip the sugar into a large mixing bowl, pour in the oil and add the eggs. Lightly mix with a wooden spoon. Stir in the grated carrots, raisins, poppy seeds and orange rind.
• Mix the flour, bicarbonate of soda and spices, then sift into the bowl. Lightly mix all the ingredients – when everything is evenly amalgamated, stop mixing. The mixture will be fairly soft and almost runny.
• Pour the mixture into the prepared tin and bake for 40-45 minutes, until it feels firm and springy when you press it in the centre.
• Cool in the tin for 5 minutes, then turn it out, peel off the paper and cool on a wire rack.
• In a large bowl, whip the double cream to a very thick consistency, then divide it in half.
• To one half stir in the cream cheese, lemon zest and grated carrot and this will give you the carrot cake filling. Set aside the rest of the double cream for the chocolate cake filling.
• In another large bowl, make a buttercream icing by beating the butter till soft and creamy, then add the icing sugar and beat again till soft and smooth. This will give you the classic sponge filling.
• Now that you have all your cakes, you can begin to assemble the ‘sandwiches’. You should be able to slice your cakes with a bread knife and treat them just like a loaf of bread but it may help to pop the cakes in the fridge for an hour before doing this.
• Then simply slice all the cakes and fill them like you would as if making a sandwich. I’ve cut them into triangles because I think they look so pretty like this but you could go for halves or even dainty fingers.

‘Lobster Roll’ enriched dough
• To make the enriched dough put the flour, caster sugar, salt and yeast into a large bowl and set aside.
• Put the milk, butter, clementine zest and cinnamon into a small saucepan and cook over a low-medium heat until all the butter has melted. Set aside until just lukewarm.
• Make a well in the middle of the flour mixture, then pour in the milk mixture and add the egg. Mix with your hands to form a rough, soft dough. Tip out onto a lightly floured work surface and knead for about 10-15 minutes until smooth and elastic (this can be done in a stand mixer, using the dough hook on low speed for 10 minutes).
• Place the dough in a lightly greased bowl and cover with cling film. Leave it to rise for about 1-1½ hours or until it has doubled in size.
• Once the dough is risen, tip it out onto a lightly floured work surface and divide it into 12 equal pieces.
• Roll each piece into a sausage (finger roll) shape and lay them in two rows of 6 on a lined baking sheet.
• Cover the sheet with oiled cling film, set aside and allow the buns to prove for 45-60 minutes until risen and puffy.
• While the buns are proving, heat the oven to 180°C and once proved, bake the buns for 25-30 minutes or until a light golden brown. Set aside on a wire rack till cool.
• Prepare the ‘Marie Rose’ icing by beating the icing sugar, jam and cream cheese until you have a light and fluffy mixture.
• Slice open the buns and spread or pipe the icing into each bun.