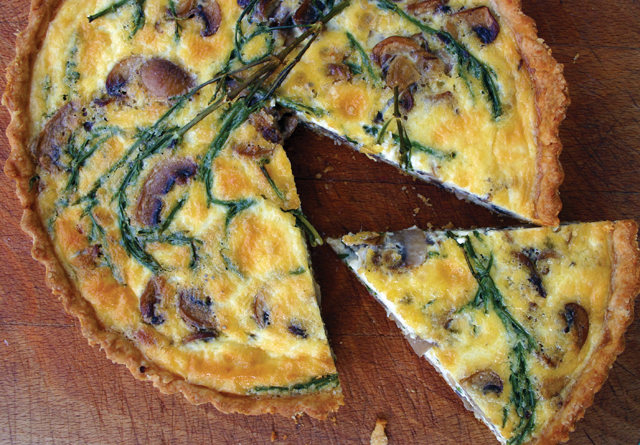 Last year I only made one quiche. Something must have gone seriously wrong somewhere, because in my humble opinion the quiche is the cornerstone of a good picnic; it’s light yet entirely satisfying and even though the French would love to claim it as their own, I feel there’s something so very British about the quiche. I see it as the British version of the rustic Italian pizza, or the Spanish frittata but with a pastry base – and as we all know, you can pretty much make anything British by adding pastry to it.

It’s a sin, I know, but I’ve never cooked with samphire before, even though I love the stuff and it’s grown locally here in the saltmarshes of Lincolnshire. It’s one of those ingredients that seems to have passed me by for some daft reason and now that it’s so wonderfully trendy I’ve had my eyes opened to how amazing it is. It works well as a vegetable and goes wonderfully with fish and chicken; or as a herb, used like it is here, alongside mushrooms, garlic and a little rosemary. It has a beautifully salty taste that complements parmesan too, so I’ve included some in the pastry.

METHOD
Make the pastry by rubbing the butter into the flour in a large bowl, until you have something resembling breadcrumbs. Stir in the grated parmesan, then add a tablespoon or two of cold water and bring together into a dough with your hands – you may need to add a little more water to create the dough but you will feel how ‘short’ the pastry is.

Wrap in cling film and pop in the fridge for at least 30 minutes.

In a large pan, gently melt a generous amount of butter with a little olive oil and add the mushrooms. Stir them around and then leave them until they begin to squeak. Add the garlic, plenty of pepper and a little salt, and turn up the heat a bit. Sauté them until they begin to brown slightly, then add the samphire and continue to sauté for another five minutes, then remove from the heat.

Now your pastry should be ready. Roll it out and line your greased quiche pan. Place some baking beans on top of the pastry and blind bake for 15 minutes on 150C.

Once your pastry is turning golden, take it out of the oven and set aside whilst you beat the eggs into the cream.

Pour the mushroom and samphire mix into the pastry case, followed by the cream, and bake on 160C for about 15-20 minutes until golden and risen. Then set aside on a wire rack to cool. The quiche should easily slide out of the tin.