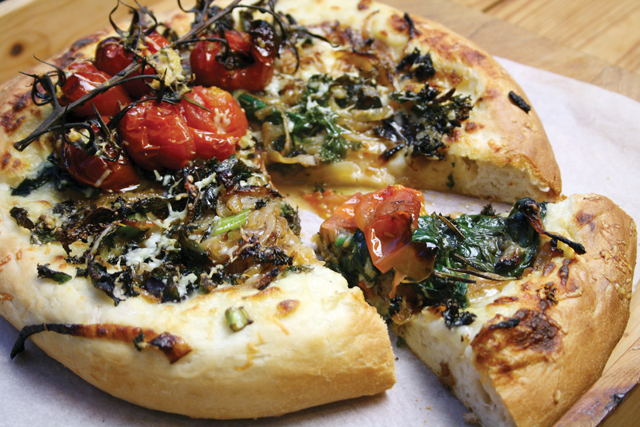 It’s been an age since I made a homemade pizza, which is quite surprising as I am a huge pizza fan – anything with this amount of warm bread smothered in cheesy sauce is always a win-win in our household. I like my pizza bases thick and the crusts even thicker, like a ciabatta or a focaccia. This white sauce idea came about simply because I didn’t have enough tomatoes for a thick sauce and I’d seen it on a menu at a beautiful pizza restaurant in Italy when we were there for Mum’s birthday a couple of years ago. It makes for a divine twist on a classic.

METHOD
Start with the dough by adding the oil, yeast, salt and sugar to the water and leaving for 5 mins whilst you sieve the flour into a large bowl. Add the water and oil mix and bring the flour together with your hands, then knead for about 10 mins until the dough is soft and silky (a dough hook on a stand mixer will bring this all together well in roughly 15 mins). Oil a large bowl, place the dough into it, cover in clingfilm and let it rise till doubled in size – roughly 1 hour.

Meanwhile make the olive oil white sauce – this is essentially a regular white cheese sauce but instead of butter, you’re using olive oil which you gently heat in a saucepan, then take the pan off the heat and add the flour and, using a wooden spoon, stir in until you have a thick sauce, then return the pan to a very gentle heat whilst you stir continuously. The sauce should thicken and at this stage will come together to form a large ball – don’t panic, remove the pan from the heat and add a splash of milk and stir in well. Add a little more milk and stir again, then return to the heat and continue stirring and adding milk in small doses. Once all the milk has gone let it bubble gently on the heat for a further 5 mins, then add the grated cheese and vegetable stock, stir in and set aside until you need it.

To caramelise the onions, add some butter and olive oil to a large pan, add the onions and a pinch of sugar and let them gently sweat away for up to at least 30 minutes, if not longer. You will need to stir these every few minutes and add some seasoning and a teaspoon of oregano after about 15 minutes but the longer you let them cook the darker golden they will go.

Prepare the kale and spinach by gently steaming them for 5 minutes.

Once you have all your toppings ready the pizza dough should be perfectly risen – at this point you should heat your oven to 160C. The quantity of dough you’ve made should be enough for two large pizzas or four mini pizzas.

Oil your work surface and your hands and divide the risen dough into either two or four and form each piece into a nice smooth ball. Place one ball in the middle of your work surface and push the dough out towards its edges, going around the shape to form a circle. Continue to do this until you have your desired shape.

Now for the toppings. Start with the white sauce, which you should spread on with a spoon but don’t go all the way to the edge. Then the onions and a sprinkling of kale and spinach followed by a stalk of vine tomatoes. Season well, sprinkle over some more oregano and a last handful of grated cheese and bake in the oven for roughly 15-20 mins until the pizza is risen and golden and the tomatoes have burst. Eat and of course, enjoy!