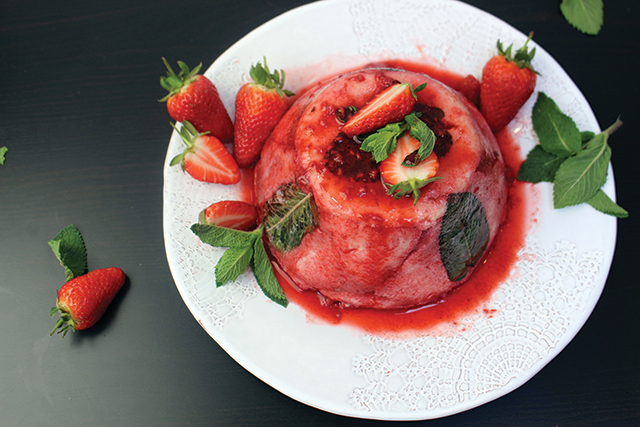 When those of my friends not born on this fair isle ask me why us Brits are so obsessed with the weather I simply say to them, “spend a summer in the UK and then you’ll understand.” I think this year in particular is a great example of the British weather.

I’m hoping for a hot June but you never can tell. It would be nice to be able to plan a picnic or two with more than just the two-hour warning and the mad dash to fill sandwiches and bake a quiche. With Wimbledon and Henley on the way, we do like to get the hampers out and a enjoy a cool glass of the classically British Pimm’s. That’s when you know summer is here, in your glass if not in the weather itself.

I can’t think of anything more wonderful than a summer pudding to conjure up a typical British Summer and for me, the great British strawberry is its emblem. Biting into a sweet juicy strawberry is the promise of lazy days in the sun and warm evenings watching dragonflies skim over ponds, the thwack of cricket ball against bat and picnics in the park.

If you want to keep this dish alcohol-free, simply replace the same amount of Pimm’s with a diluted cordial such as elderflower or blackcurrant.

This recipe is for a 1 litre pudding basin.

METHOD
Use a little butter to grease your pudding basin, then take the slices of bread and patchwork them into the basin. I usually cut a circle for the base and then triangles for the sides, fitting in pieces where there are patches. Don’t worry about being too neat, I like the patchwork look, but make sure you leave enough bread for a lid. I’ve slipped a few fresh mint leaves under each slice too.

In a pan add the fruit, Pimm’s, sugar and vinegar and gently heat. You want it to heat through for a few minutes so the sugar dissolves but so that the fruit doesn’t lose its texture.

Pour the fruit into the pudding, leaving a little juice and fruit back and place the lid bread on top. Spoon a little more of the liquid onto the top ensuring in runs down the side and all the bread is covered, and then place a small plate on top of the pudding – small enough so that it touches the pudding. Then place something heavy, like a couple of tins on top and pop it in the fridge for at least twenty-four hours.

Once you’re ready to serve, place your serving plate on top of the pudding and holding the basin against the plate, flip the pudding upside down and tap it on top. Sometimes the pudding drops out easily but on occasion the butter used to line the dish solidifies and you may have to wait a while for it to melt and release the pudding.

Drizzle the pudding with the remaining juices and serve with lashings of cream.