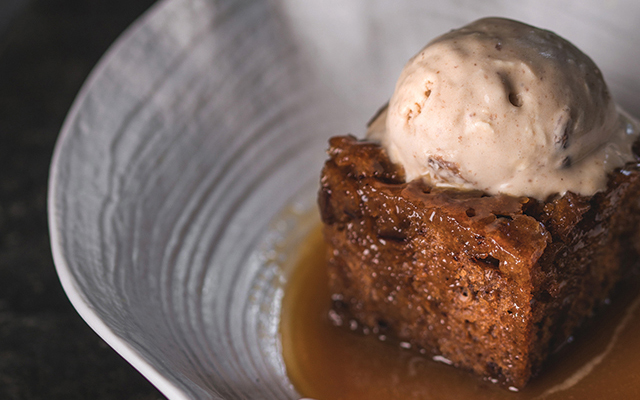 In a large bowl, cream the butter and sugar until pale and fluffy. On a low speed, gradually add in the eggs and mix until combined together. Add 1/3 of the flour and combine together, followed by 1/3 of the dates. Continue to add the flour and dates until they’re all mixed in.

Using a heatproof bowl, spoon in the mixture, cover and seal with baking paper and string, and steam for 2 hours.

This pudding isn’t anything without a generous covering of butterscotch sauce and a dollop of ice cream, so 10-15 minutes before your pudding is cooked, in a heavy based pan, melt the butter, sugar, vanilla and salt on a gentle heat. Bring the mixture to the boil and whisk for 3 minutes until all of the ingredients are well combined. Pour in the cream and whisk until the mixture comes back up to the boil. Once at boiling temperature, remove from the heat and leave to one side to cool down.

To serve, spoon a generous helping of the steamed sponge into each bowl, and drizzle over some of the sweet butterscotch sauce. If you have some in the freezer, serve with rum & raisin or vanilla ice cream.