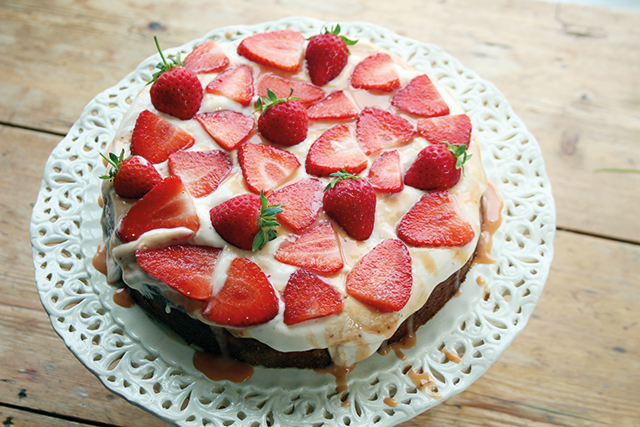 I’m sure you’ll all agree that this summer has been spectacular. It will be a year to remember, not just for the sunshine and warmth but for the abundance of forest fruits and berries. I’ve grown my own strawberries again this year and the yield has been terrific and continues even now. I also have a wild blackberry bush at the back of the garden that started fruiting early and keeps on giving on a weekly basis. I’ve frozen so much and made so many cakes and pudding and jams but I think this strawberry curd is my favourite. It’s also the easiest and most hassle-free curd recipe I’ve ever made, you must try it!

This cake is less of an actual cheesecake and more of a cheat’s baked cream cake, if there was ever such a thing. To me it actually tastes more like the traditional Jewish, New York style baked cheesecakes I ate as a kid than the horrible cloying so-called cheesecakes that you get in supermarkets and even at some restaurants. It manages to be thick and light at the same time and has just the right sweet to sour ratio. I’ve used a homemade strawberry curd but you really could make this with any curd from lemon to rhubarb. Maybe there’s something growing in your garden that you could include?

METHOD
Start with the strawberry curd by placing the strawberries in a saucepan with the sugar, butter, orange zest and orange juice. Stir over low heat until the butter has melted and the sugar dissolved. Simmer gently for 5 minutes, then remove from the heat. Once cooled a little, whizz up with a stick blender until smooth.

Lightly beat the egg yolks in a large bowl, then stirring constantly, slowly add the strawberry mixture in a thin stream. The mixture will thicken as you add it, then return to a low heat and cook for 2 minutes, stirring constantly. Do not allow the mixture to boil or the curd will separate. Pour into hot sterilised jars and seal while hot. Curd will keep in the refrigerator for up to two months. Once opened curd will keep, refrigerated, for 5 days.

Preheat the oven to 180˚C and line the base of a 20cm round spring form tin with baking parchment.

In a bowl mix the crushed biscuits with the melted butter and sugar. Stir until all the biscuit is coated and then tip them into the tin and press into the base.

Make the filling by whisking the eggs and sugar together until blended, then pour in the cream, sift in the flour and whisk again until blended. Next, stir in the lemon juice, zest and curd and whisk until combined and smooth.

Pour the whole lot into the tin on top of the biscuit base and bake in the preheated oven for about 35-40 minutes, until the filling has set and is pale golden brown on top. Remove from the oven and set aside until cool.

For the topping, stir the curd into the yoghurt and spoon it onto the top of the cooled cheesecake, then layer the strawberries on top in a fashion that pleases you.