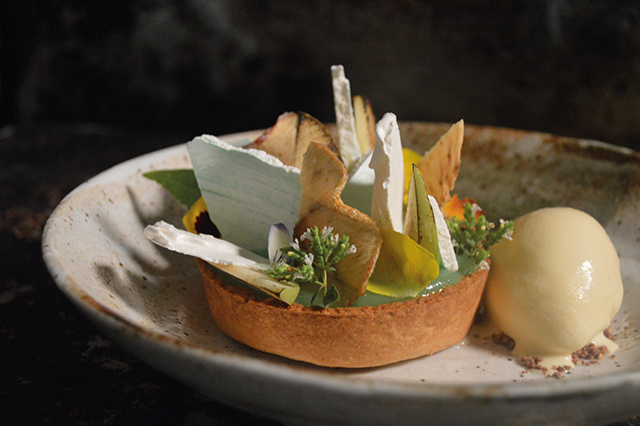 This month it’s all about the start of the apple season and to celebrate in the restaurant, we’ve given the humble apple pie a bit of a twist. Served in a delicate pastry shell, we’ve layered crème pâtissière with caramelised apples, meringue shards, dehydrated apple crisps and a delicious clotted cream ice cream.

METHOD
For the pastry, we’ve used a traditional short crust recipe using flour, butter, water and a pinch of salt. We’ve then lined 8cm round cases and baked until golden. Apple crisps are made by thinly slicing apples and arranging on a metal baking tray. Sprinkle with cinnamon and sugar and bake at 110ºC until crisp (around 45 minutes). To caramelise wedges of apple, cook in a heavy based sauce pan with brown sugar, butter, cinnamon and a squeeze of fresh orange, until soft.

For the meringue use 60g egg whites (2 eggs) and 120g caster sugar. Place the caster sugar on a lined baking tray and place in the oven for 4-5 minutes at 220ºC until the edges start to melt. In a clean metal bowl, whisk the egg whites until stiff. On a medium speed, gradually add in the heated sugar, whisking continuously for 10 minutes until thick, glossy and smooth. Spread the mixture over a lined baking tray and sprinkle for edible green powder before placing in a 110ºc oven for 20-25 minutes. Leave to cool and harden before breaking into pieces.

CREME PATISSIERE METHOD
For the crème pâtissière, bring the milk and vanilla to the boil in a saucepan and remove from heat. Mix the sugar, egg yolk and flours together until smooth. Pour one-third of the warmed milk over the egg mixture and whisk continuously. Pour the egg and milk into the saucepan with the remaining milk and whisk over a medium heat until the mixture comes to the boil. Turn off the heat as the mixture starts to thicken. Cover with cling film and leave to cool. Once completely cooled, leave in the fridge until needed.

To build the apple pie, place crème pâtissière in the base of each pastry and top with apple and shards of meringue and serve with clotted cream ice cream.